In this post: Wouldn’t you know it that in the midst of all of our Curb Appeal projects, we had to stop and go car shopping?! Craziness at Chez Acheson, I tell ya, craziness!

Anyway, if you’ve been paying attention, we’ve been talking curb appeal for the last few weeks; we shared how to get a great lawn (ours is still a work in progress – apparently there are no ‘quick fixes’!), some gorgeous lighting options from The Home Depot, several photos of front porch inspiration and of course why it’s important to have great curb appeal.

Well…we’re finally ready to show you the first of our own projects – The Flagstone Walkway!

Now, I HAVE to STRESS that this is only a progress picture because while the walkway is actually finished, the grass hasn’t quite greened up between the flagstones – so it’s nowhere near as lush as I’d like it to be. We’re working on it though!  Think lots of watering. Me and the hose. The hose and me. Sorry. I digress. We’ll also be adding some high traffic seed to the walkway this fall to toughen up the grassy area even more.

So how did we get from ‘Before’ to ‘Progress’?

The first thing we had to do when we were planning the new walkway was to decide what we wanted it to look like!

I have always loved flagstone pathways and really love the casual look of a flagstone path through the grass – like a country cottage meandering path. Since we don’t get much snow here, shovelling is not really an issue and because this style of walkway has the tops of the stones sitting level with the grass, we can just run the lawnmower right over the top to keep the grass trimmed.

We knew we’d found exactly what we were looking for when we stumbled onto this video by The Home Depot.

Since we had a brick walkway and not grass in some of the (expanded) walkway, we had a little more prep work to do than shown in the video. When we removed the existing brick walkway, we found there was a lot of crushed rock underneath.

Hmm, what do we do with that? Aha! Wheelbarrow needed!

Daddy’s helpers putting together THE WHEELBARROW!

Once the handy-dandy wheelbarrow was assembled, Dean removed the crushed rock – and put it aside for later use. We filled in the now-empty space with a few inches of soil and sodded the whole area. (Don’t mind the brown sod – it was super duper hot that weekend).

Then we were ready to do the step-by-step laying of the flagstone!

Lay out flagstone in a random pattern. Now would be the time to make adjustments! Look at it from all directions. Turn or move any stones that don’t look quite right. You don’t want uniformity in the spaces but you do need some balance.

Once you’re happy with the layout, use the square-head spade (not sure if that’s the technical term!) to cut sod carefully around flagstone.

Lift the stone out of the way. Remove the sod and excess soil from underneath. (This seemed a little counter-intuitive for us after having just put down soil under the new sod, but it was necessary. We saved the soil for the garden expansion project, so it wasn’t wasted.) Also be sure to remove any roots or rocks that may be in the way.

Add 1-2 inches of crushed limestone. Smooth out and tamper. You can use an actual tamper, but we used the end of a 2×4 – both because we didn’t have a tamper (!) and because the flagstone was such an irregular shape that the 2×4 worked so much better than a tamper would have.

Set flagstone back in place. Press down.

Repeat for all flagstones. Then using a long level, be sure all stones are level to each other (not shown).

And that’s it – all done! Again excuse the brown grassy spots…pretend they’re green with me, m’kay?

For more of our current house’s curb appeal projects, visit these posts:

What do you think of our new walkway? Are you as partial to flagstone as we are? What is your favourite type of walkway? Any curb appeal projects up your sleeve? Any instant grass-greening tips for us?

P.S. Don’t forget – we aren’t finished yet! Watch for more of our curb appeal projects, including a garden expansion, concrete foundation refacing, window boxes and the final reveal of the whole ‘kit-and-caboodle’ all coming soon!

The Flagstone Walkway project was sponsored by The Home Depot as part of The Curb Appeal Series. All work, ideas and opinions are – as always – our own! For all of our policies, please visit our Policies page.

I'd love to chat with you in the comments! Cancel reply

A little Home Made Lovely love

My aha moment was when you talked about undertones!

I found my style and was able to bring our small space together by creating a cozy and inviting home for our family of 8! My aha moment was when you talked about undertones! At first I was confused about what the undertone of my room really was. But after carefully analyzing the details I figured it out! That was the moment when I could bring everything together.

I’m falling in love with our home all over again.

My ah-ha moment was when I realized how much time and money we have spent in the past couple of years because I was going about things all the wrong way. I have painted rooms, changed decor and bought things over and over again and just could not get comfortable. I loved the house but it didn't feel like home. We did not focus on our true design style and never finished a room. It caused us to purchase things we didn't love. BUT now because of your course, we have found our style, re-focused on our whole home design plan and are decorating one room at a time. It is really exciting and I am falling in love with our home all over again."

Your explanation of paint colors was the light bulb moment for me! Your explanation would have saved us from painting a room twice along with saving money for the painter's extra visit. I am enjoying your teaching.  Thanks!

Oh Shannon, thank you, thank you thank you!!  I wish I could download you and take you with me, but your Decor Staples Checklist has definitely given me the guidance and filled me with the confidence I need!

Orbs are such a great decor item to add to a space. Staining the hoops really gives them a vintage feel. Thanks for the inspiration 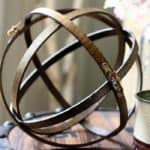 How tidy is your home?

Join 9,200+ other mommas and get into my top-secret resource library filled with more than 80+ free checklists, cheat sheets, and art printables for your home.

"Home is the most important place on earth."