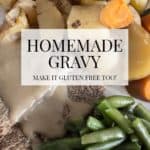 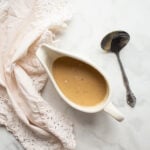 In this post: Easy homemade gravy recipe that is perfect for pot roast, turkey, chicken, or even poutine! Make it gluten-free by using rice flour or another gluten-free flour, or vegan by using vegetable broth.

It took me years to learn to make gravy. Which is funny because once you know how it’s really not at all difficult! Gravy makes so many things taste better. Homemade gravy even more so. And it’s one of those easy recipes that can add a big taste to so many foods! 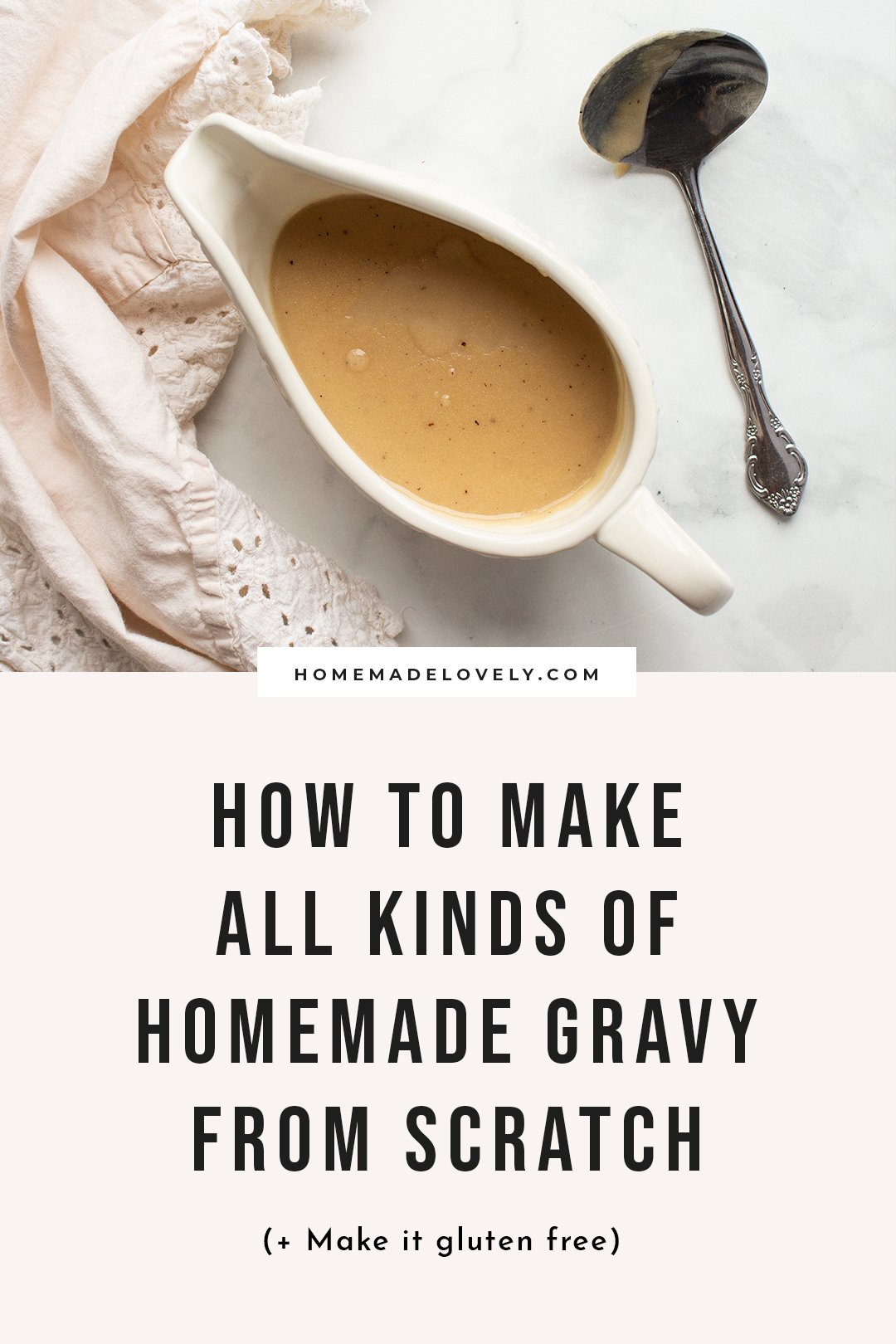 How to Make Homemade Gravy for Meat and Veggies 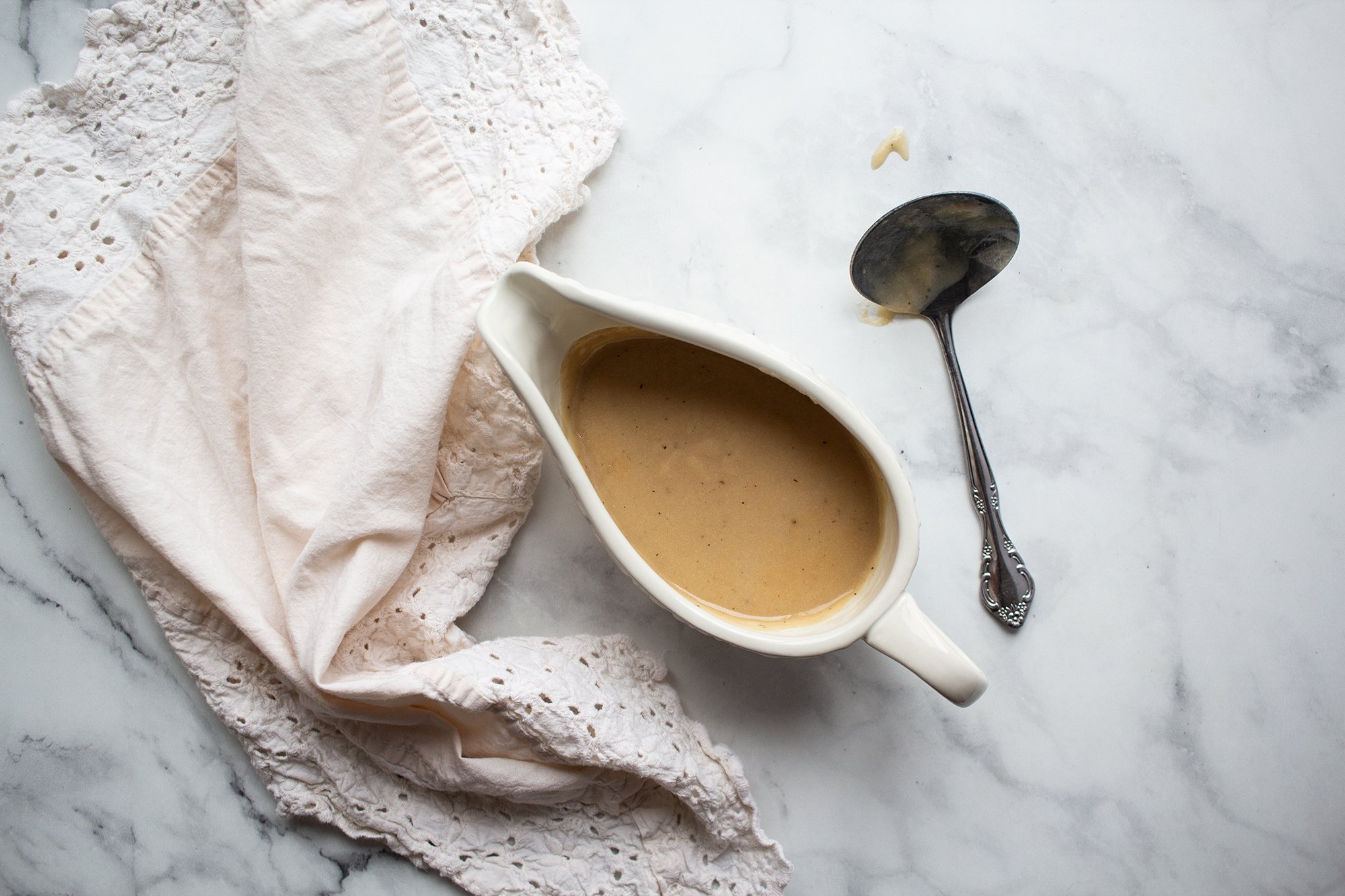 Gravy is a staple for our family’s Sunday Suppers. It’s also a staple at most holiday meals – like Thanksgiving and Christmas – where family and friends gather together. It’s the perfect addition to so many foods, it doesn’t take long to make and it can be made ahead and stored in an airtight container the fridge for up to five days and in the freezer for longer.

Traditional gravy is made by starting with a roux. Roux is a 1:2 ratio of a fat (usually butter, but other fats like oils, or bacon grease work too) and flour. To make the roux, the fat is melted over low heat in a saucepan and then the flour is added to make a paste. Then small amounts of a liquid are whisked in. The liquid can be drippings from a roast, canned, homemade or carton broth, or even milk. The roux mixture thickens the liquid, which makes gravy. You can then add seasonings like salt and pepper if you desire.

How do I make gravy using roast pan drippings?

Being careful not to burn yourself, strain any bits and pieces and fat off by pouring the drippings through a fine-mesh strainer into a measuring cup.

How do I make gravy gluten-free?

To make gluten-free gravy from scratch, you can simply replace any required all-purpose flour with the same amount of rice flour (white or brown) when making the roux. You can also use tapioca (or corn) starch to replace the flour, but then you will only need about half as much because those starches thicken up much more than flour.

How do I use milk in gravy?

If you’d like a creamier gravy, you can replace some or all of the liquid with milk. Any milk works too – even plant-based milk like soy, coconut, and almond. Just be sure to use unsweetened versions of those or your gravy may come out much sweeter than you will like.

What kind of liquids can I use to make homemade gravy from scratch?

To make your gravy, you can use:

What other seasonings can I add to my homemade gravy?

I like to keep my gravy pretty simple and just season it with salt and pepper. But you could try these other seasonings as well:

With this simple recipe, you can make chicken gravy, beef gravy, or even veggie gravy!

See, not hard at all.

Just choose the broth that coordinates with the dish you’re serving!

The trick to homemade gravy is the roux (butter and flour in this case): don’t walk away while the roux is heating, otherwise, it will burn. 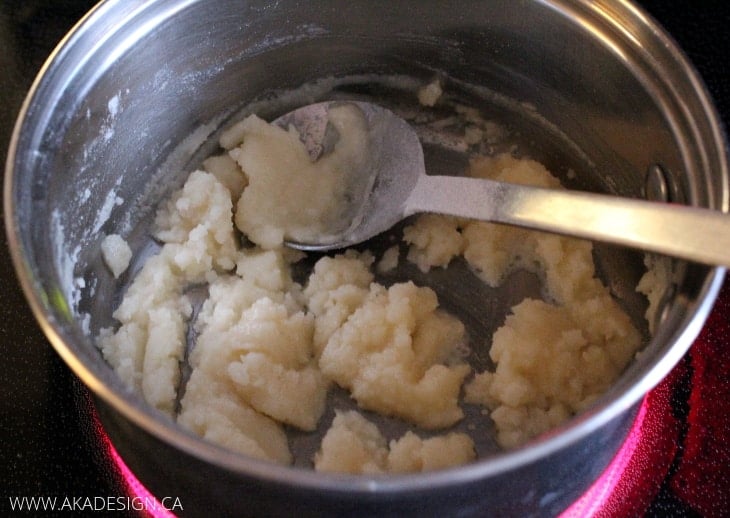 What to serve your homemade gravy with 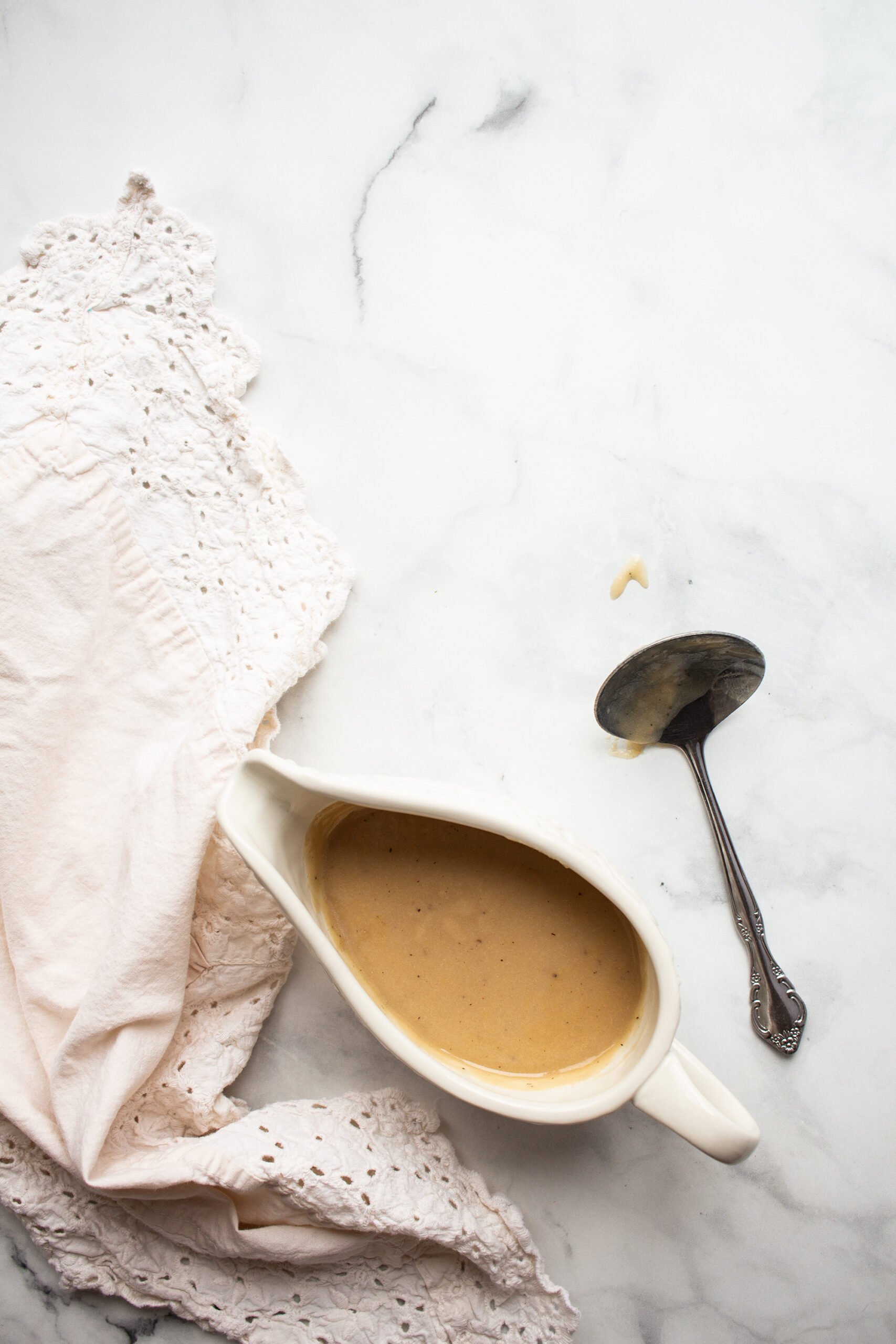 Did you make this recipe?

Do you know how to make gravy? Do you make it this way? Or do you use another method? 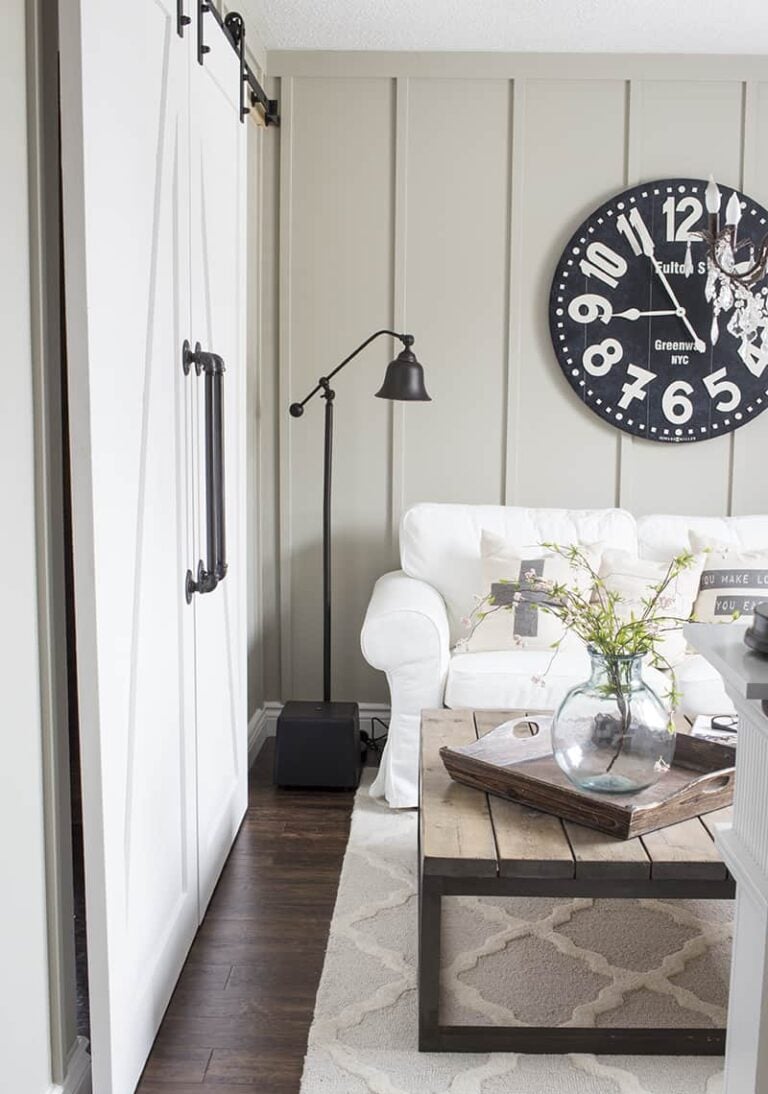 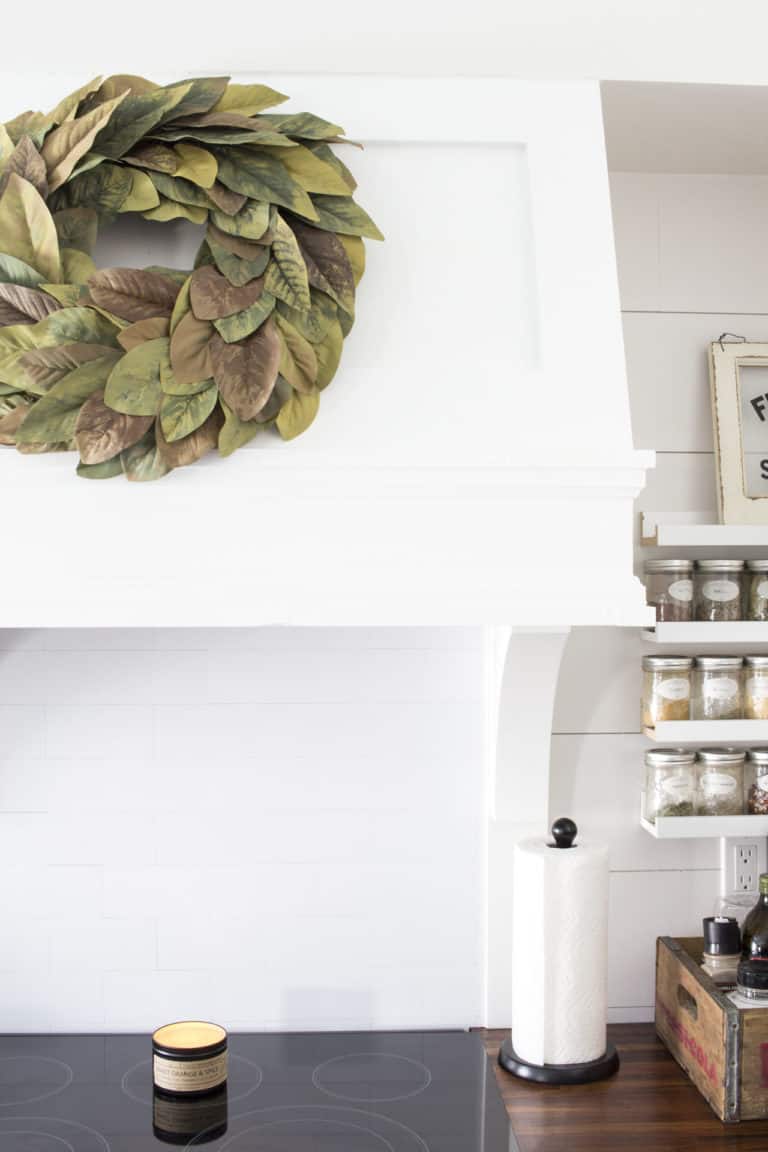 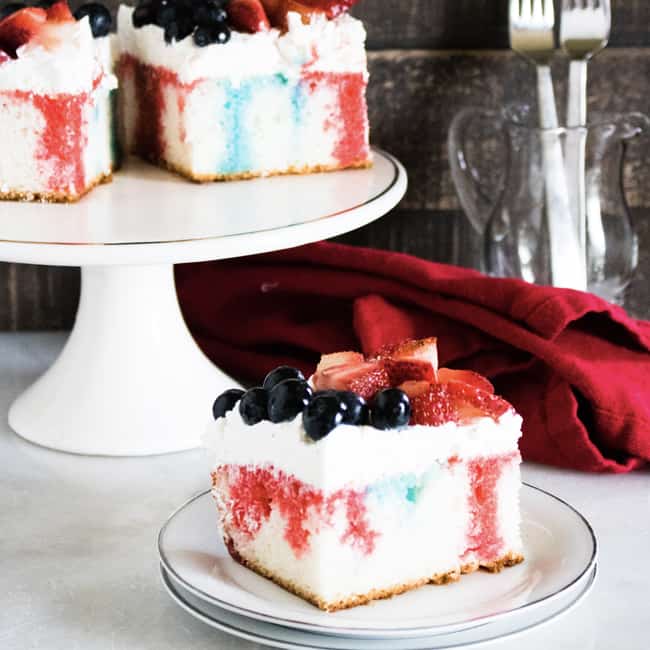 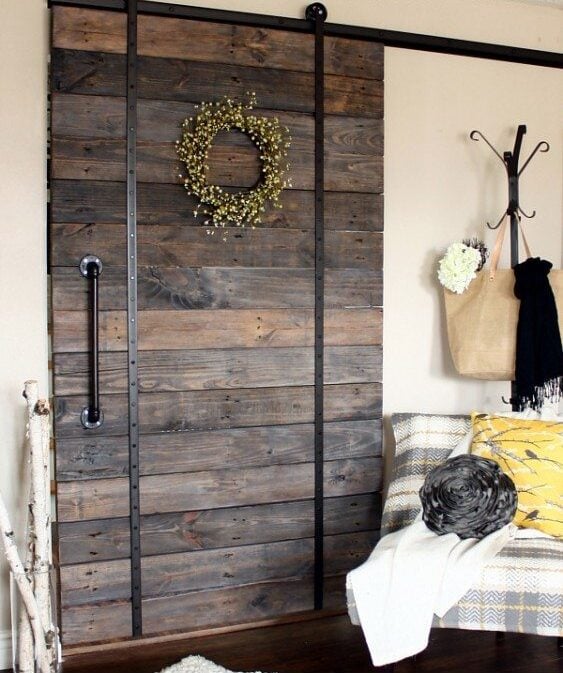