Want a beautiful home but don't know how to get it? Let me show ya how!
Yes, Please!

If you’ve landed on this house tour page from any of the others, it may seem obvious that Dean and I have moved a lot in over 20 years of marriage.

Which is entirely true.

The gist is we’ve not always been great planners. We bought our first house when we already had two kids and a third on the way. Then a few years later the commute was too much for Dean (and the three vehicles we went through in five years), so we moved back to the city. But moving into the city means prices are higher than outside the city so we could only afford a wee little bungalow (1050 sq. ft.). But that wee little bungalow was so good for us in so many ways.

We figured out how to work together, we launched Home Made Lovely and we spent a lot of time together as a family. Love grows best in little houses.

But alas we outgrew that house and bought the next bigger size we could afford (1350 sq. ft.) in a beautiful neighborhood.  We loved that house and the yard and the neighbors. But it too became too small for us. (We have a large extended family!)

It’s not huge, about 2000 sq. ft. plus a finished basement. But it’s open and there are four actual bedrooms upstairs. And more than one bathroom – which feels like a luxury with three teenagers!

And there’s a pool which I’ve always wanted – like forever!

We will be updating it as time and money allow. Just like you and your home!

So far we’ve managed to update the main floor living and dining rooms.

The entryway started out with some good bones, a nice high ceiling, and plenty of space. But it lacked character.

So we swapped out the light fixture, painted the doors, and added some panel molding and new wall paint.

The dining room started out the same as the entry…a little bland with good bones.

But we changed the lighting, added a coffered ceiling detail and more panel molding – along with some new paint of course! 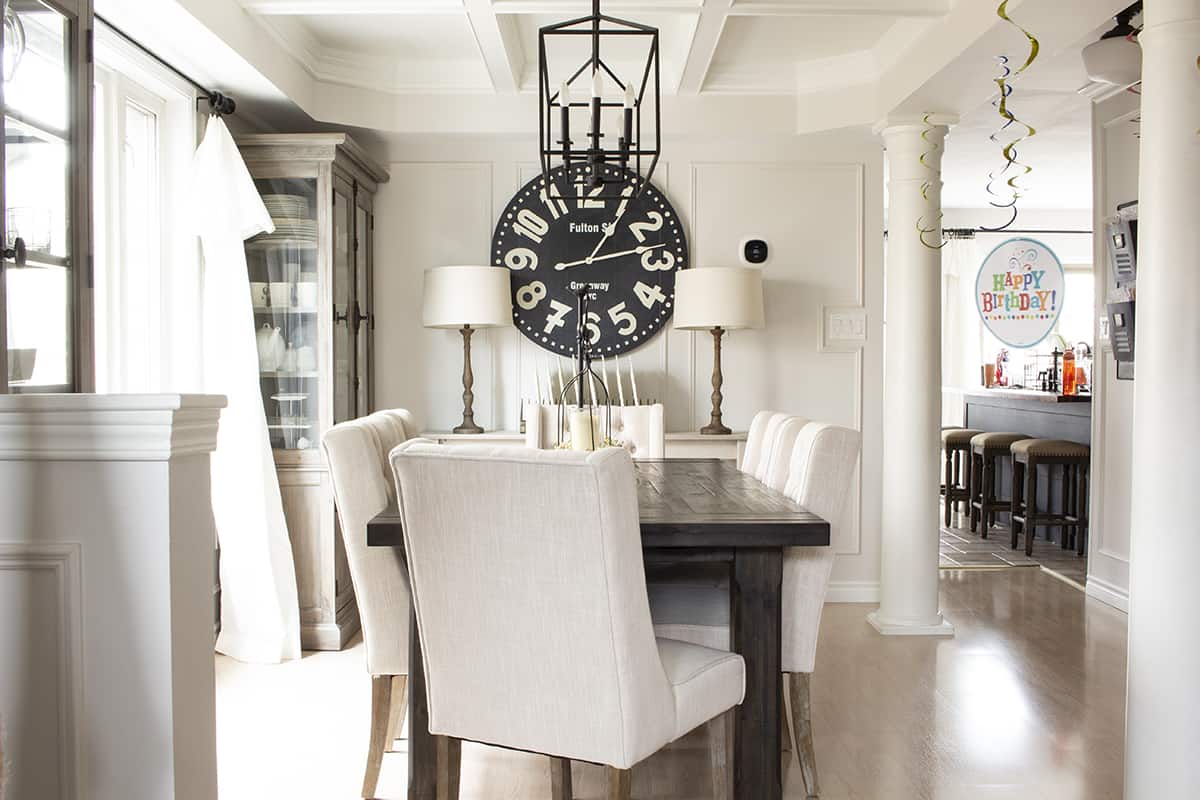 And the living room too was a bit dark for us. But that was easily lightened up with some paint and our style of furniture.

And we changed the couch’s slipcover to Nordvalla Beige (from Gray) in 2018, and refinished the fireplace, and added shiplap (initially painted black and then later white) to the wall in 2019. 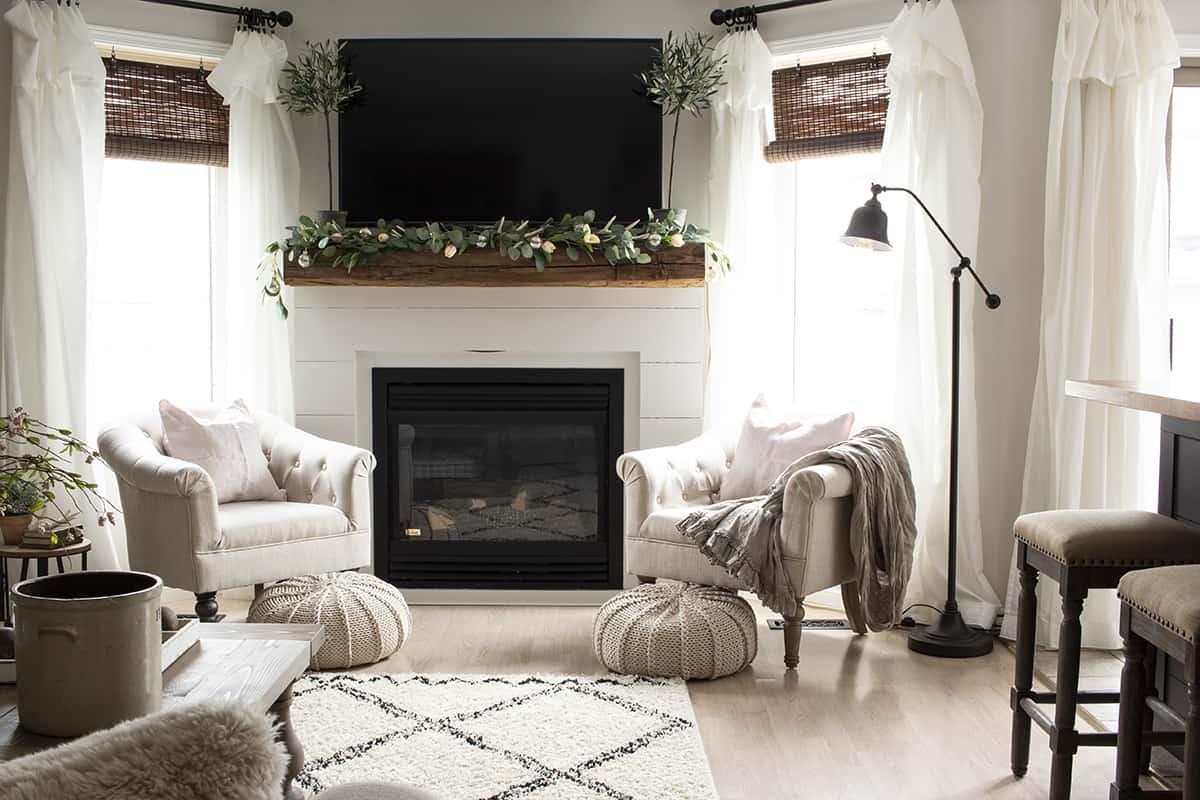 The open layout of the kitchen with the island separating the living room from the kitchen was so much of the reason we bought this house. It just needed some updating.

The master bedroom is still not finished the way we want it yet, but we did paint and add in a few accessories to make it our own. And then repainted and changed the furniture. 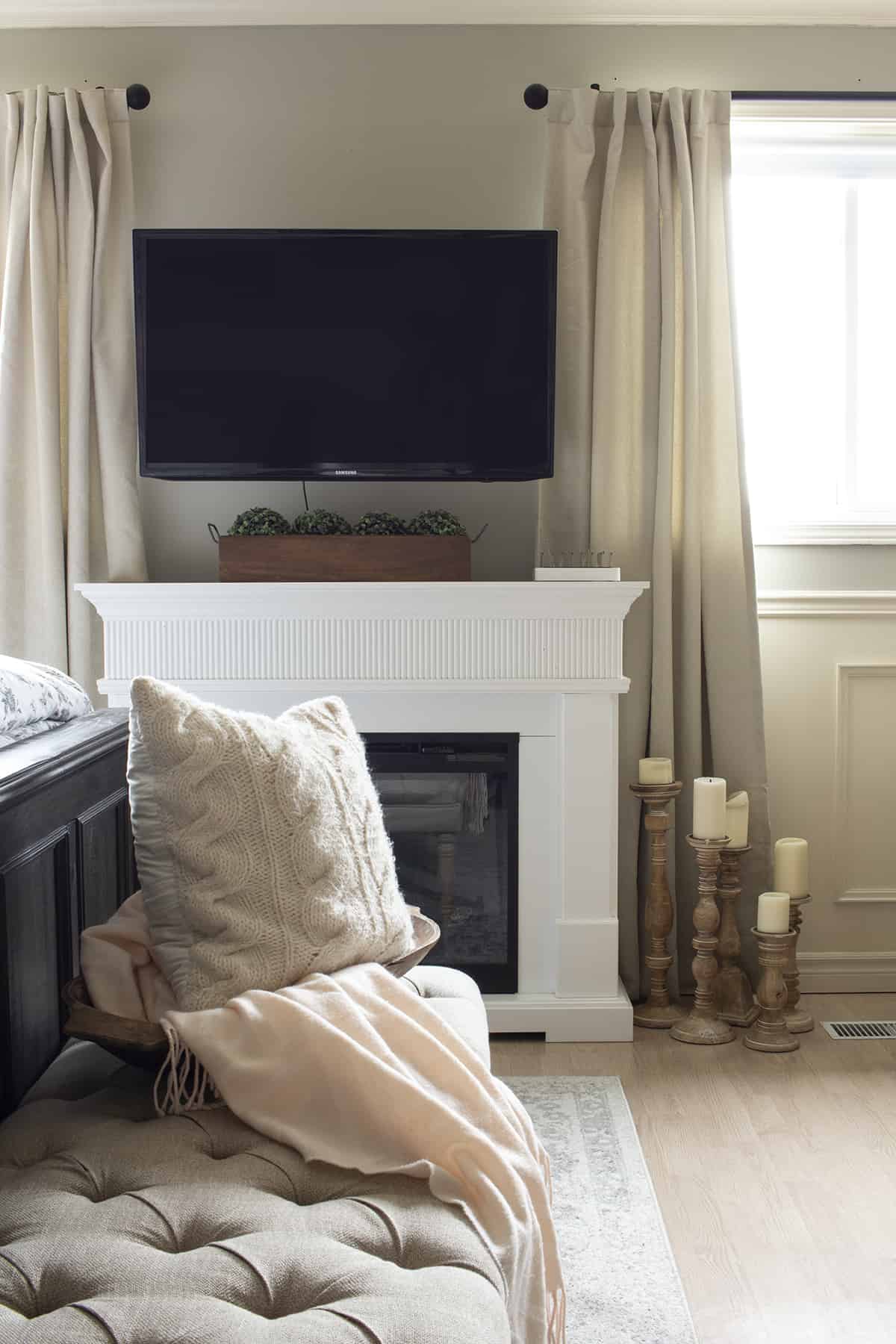 Our oldest daughter got a room makeover in early 2017 when we participated in the FrogTape Paintover Challenge.

(This page will be updated as we update the house.)

You can see our FIRST house here.

And our SECOND house here.

And our THIRD house here.

And our FOURTH house here (you are here).

Welcome! I'm Shannon, author and founder of Home Made Lovely. I teach mommas just like you how to create the home you've always wanted.
Find Out More

It’s been a long winter!

Get 5 Quick & Easy Ways to Refresh Your Home for Spring ...and kiss those winter blues goodbye!

A little 🖤 for Home Made Lovely

I found my style and was able to bring our small space together for our family of 8! My aha moment was when you talked about undertones! That was the moment when I could bring everything together.

Falling in love with our home again

My ah-ha moment was when I realized I was going about things all the wrong way. I loved the house but it didn't feel like home. BUT now because of your course...I am falling in love with our home all over again.

Thank you for your direction and inspiration!

You have been very helpful in just identifying my style and what I like! Thank you for your direction and inspiration!

Decorating is not as complicated as it once seemed!

I love your easy process to determine my style. I've also learned that my style has changed over the years and seasons of my life and that decorating properly/successfully is NOT as complicated as it once seemed!!!

Your explanation of paint colors was the light bulb moment for me! I am enjoying your teaching.  Thanks!

Filled me with the confidence I need

Oh Shannon, thank you, thank you thank you!!  I wish I could download you and take you with me, but your Decor Staples Checklist has definitely given me the guidance and filled me with the confidence I need!

Orbs are such a great decor item to add to a space. Staining the hoops really gives them a vintage feel. Thanks for the inspiration.

I love your instructions!

LMAO!! I love your How Not to Paint Cabinet instructions! It made me laugh with good humor! Kudos for sharing your lessons learned!!

I'm so done with Haphazard Decor! (Yes, I think I just made that "style" up). Thank you for your style quiz!

I thought the quiz was so accurate, I want my friends to do it. I feel I like such a mix of things and the quiz described them all so well!

Before I felt overwhelmed by my clutter. Now, I feel like I have a trusted friend alongside me to pull me out of my paralysis with a fresh mindset!

How tidy is your home?

Join 9,500+ other mommas and get 5 quick and easy, budget-friendly ways to refresh your home for Spring.

"Home is the most important place on earth."